Business Ethics: “Good to have” or Business Imperative?

In today’s world, business leaders talk a lot about ‘ethics’ and ‘values’. When speaking publicly about their organizations, they will usually stress the important role of corporate values in the success of their organisation. To be fair, a lot of efforts have been undertaken around the world to develop ‘values statements’ as well as to translate these moral principles into rules of conducts formalised into codes that are supposed to guide the behaviour of employees while they are doing their work. Hence it may seem extremely ironical to notice that despite all the talking, the code of conducts, the ethical trainings and so on, too many news headlines on corporate failures and scandals remind us that unethical behaviours at every levels of an organisation  are much more common than people would like to believe. It raise some important questions as to whether organisations  have made any real improvements in their actual ethical practices? And how vulnerable they are to unethical behaviour? It actually may seem that the more business leaders talk about ethics, the least they practice it. In other words, too often, the business ethics efforts appear to be more about form than substance. It is just some sort of PR show to pacify the stakeholders who may care about it. Abraham Lincoln, 16th USA President highlighted this gap when he famously said:

“Character is like a tree and Reputation like its Shadow. The Shadow is what we think of it, the tree is the real thing.” 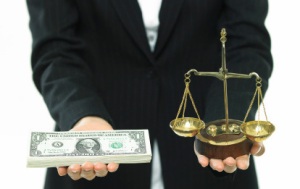 It seems that many business leaders care more about the “shadow” meaning appearing to be good than about the “tree” to really be. So while most people will pay lip service to the importance of ethical principles, the reality is that unfortunately, Ethics seem to be often considered as a “Good to Have”, something of a ‘luxury’ in the fast-paced turmoil of today’s volatile business environment. Modern organizations are indeed operating in an environment characterized by multiple pressures: a constant pace of change, continuous pressures on both revenues and earnings, where the share-price is “king” and where the average life expectancy of a CEO is continuously reducing. Hence it may not be so surprising that in some companies, the top management can, lose sight of the right course of actions by focusing on short-term opportunities at the expense of the longer-term impacts to and needs of their organisations. In this kind of context, business ethics will be obviously perceived as an impediment to doing business and will not be allowed to interfere with unethical corporate or industry business practices that generate profits on the short-term.

Benefits of Business Ethics and Cost of the Lack of it.

Of course, regular crises such as the subprime crisis and the many corporate collapses making the news headllines are strong reminders of the fundamental need for stronger ethics, risk management and regulatory compliance practices. And as usual, after those events, regulators around the world respond, with landmark legislations that supposedly aim to raise the standards of business ethics in the industries considered. But legal requirements enough to tame unethical behaviors? Ethics is not important merely because the law say so. It is not a just question of legal compliance where you just need to tick all the required boxes and once you are done, you do not need to care about anything else. In fact, by focussing purely on narrow compliance and PR communication about Ethics, while you may be able in the short to medium run to deceive your stakeholders in believing that your are abiding to high ethical standards, this creates a growing gap between the “good” perception that your stakeholders may have of you and the reality of your weak character. This will put your organisation in a very vulnerable situation as breach of ethics when exposed, will also be a breach of trust and will be incredibly damaging to your reputation and business prospects. It will result in wide range of negative direct and indirect consequences for an organization such as: negative media coverage, regulator investigation, customers boycotts, reduced share price, drop in revenue and profitability, loss of key staff, even possibly criminal investigation and imprisonment for the executives involved. In such a case, unless your organisation benefit from a monopolistic position or has become just “too big to fail”, the survival will be at stake. This, of course, applies equally for individuals, and there are plenty of cases of highly talented and successful individuals such as Lance Amstrong who were castigated because they violated some important ethical and legal requirements.

Anita Roddick, the founder of Body Shop was often cited as an example of how doing good things is good for business. She built a business model around developing quality beauty products that did not involve testing on animals and was the first to introduce Fair Trade to the cosmetic industry. By this strong ethical stance, she won the support of a growing number of more ethically and socially conscious customers.

In conclusion, behaving unethically without being caught can yield significant short to even medium term benefits but beware, as it is not sustainable. Sooner or later unethical behaviours will be exposed resulting in apparently strong-looking organisations to collapse rapidly. Hence if you want to built the environment for a sustainable profitable growth for your organisation, strong ethics is a business imperative.

Be the first to start the conversation!